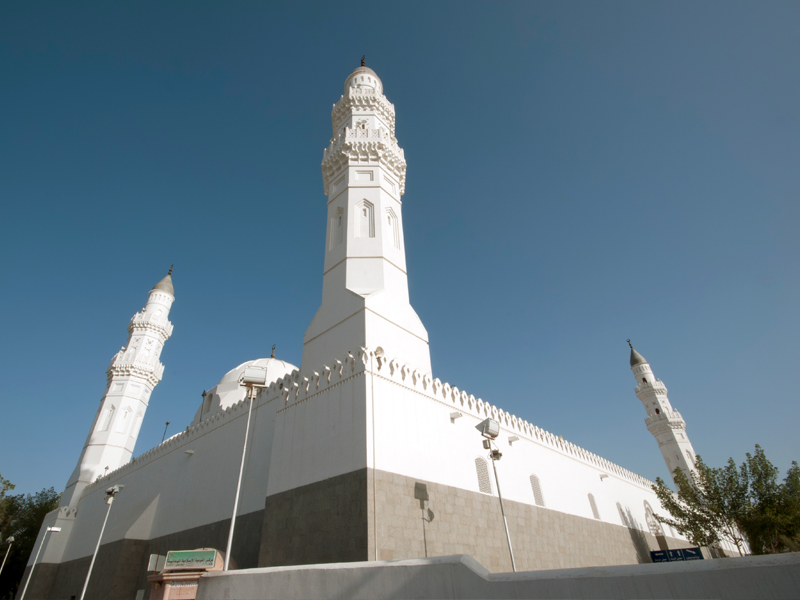 Your journey begins in Medina, spending three nights. We will then transport you to Mecca to perform Umrah and spend 4 nights. Enjoy the sweetness of praying within Masjid Al Haram at your leisure. Our guides will provide tours to all major religious and historical sites in both Medina and Mecca.

Today is a free day for you to rest and enjoy the tranquility of Medina, The City of Light, and the unique opportunity of offering the five daily prayers in Masjid Al Nabawi.. You will have the opportunity to do any of the following at your leisure:

After fajr, depending on the schedule and availability, we will provide you with a guided tour of the historical and religious sites in Medina on board our air-conditioned bus, you will visit the following locations:

Masjid Al Quba, the first masjid in Islam and was built by the Prophet his closest companions .

Masjid Al Qiblatain, the distinction of being the only masjid where obligatory congregational prayer was held facing both the old Qibla (Masjid Al Aqsa in Jerusalem) and the present Qibla (Masjid Al Haram in Mecca) in the same prayer. The area known as Saba Masajids representing the places where the believers camped during the battle of the Trench.  This includes the camp site of the Prophet (PBUH) known as Masjid Al Fath and that of Salman Al Farsi whose idea it was to dig a trench wide and long and wide enough to confound the enemy who were not expecting it.

Today, you will depart for Mecca. On the way, you will stop at the Meeqat at Dhul Hulaifa (also known as Abyaar Ali) where you will enter into the state of Ihraam with the intention to perform Umrah. Upon arrival in Mecca, you will first check-in at your hotel and then you will proceed to Masjid Al Haram to perform Umrah.

Today is a free day for you to rest and enjoy the magnificence & vibrant energy of Mecca, The Honored City. With the special convenience of your hotel located in close walking distance to Masjid Al Haram, you have the following unique opportunities:

Performing Tawaaf, the only special form of prayer unique only to Masjid Al Haram.

Our staff is available 24/7 to assist you with anything.

Today you will have the opportunity to perform Jum’a prayers in Al Masjid Al Haram. After Esha salat we will provide you dinner.

After breakfast depending on the schedule and availability, we will provide you with a guided tour of all the important historical and religious sites in Mecca aboard our air-conditioned bus, you will visit the following places:

Cave of Thaur, where the Prophet hid for a few days at the beginning of the migration to Medina.

Al Mualla cemetery where Khadija is reportedly buried along with many of the companions.

Early in the morning, you will be transported aboard our air-conditioned bus to Jeddah Airport for your return flight home. Arrival home and end of our services.